I spent last weekend in the cute mountain town of Flagstaff, Arizona, with 36 other bloggers and crafters. It was 3 days of crafting, socializing & getting NO sleep (too much activity & too hard of a floor)!

Here are a few pics from the weekend!

I made the banner, water bottle wraps and cupcake toppers for the event (you can sorta see the banner on the mirror in the background). This is our group digging in to a buffet table on the first night. 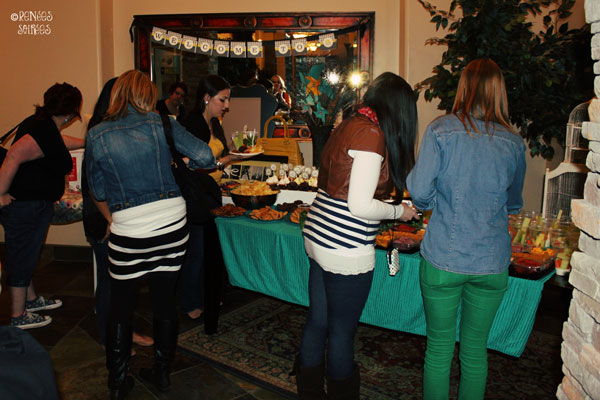 Ashley from The Shine Project gave a presentation about the amazing work her organization is doing, and then we decorated a mason jar to use to collect coins for Shine, or any other charity we support.  She calls them Change4Change. We also bought bracelets and these yellow and grey t-shirts from her, because we loved the concept of her organization so much! 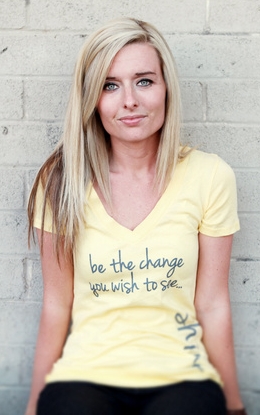 This is Mandi ~ who looks like a blonde Zooey Deschanel to me ~ decorating her Change4Change jar. Zooey or no, she was just adorable, and sooo much fun to talk to! 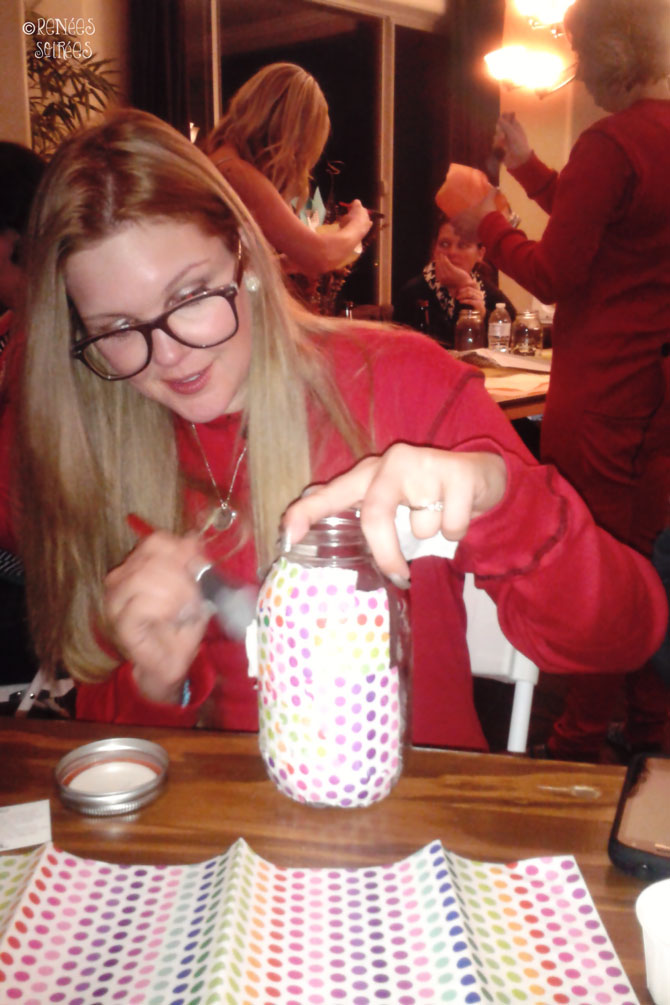 This is another Ashley (there were 3 Ashleys!). This one is owns the Little Miss Momma blog. She is not only incredibly sweet, but she is a doppleganger for one of my college friends! Oh and that cute baby bump is her soon-to-be second son. 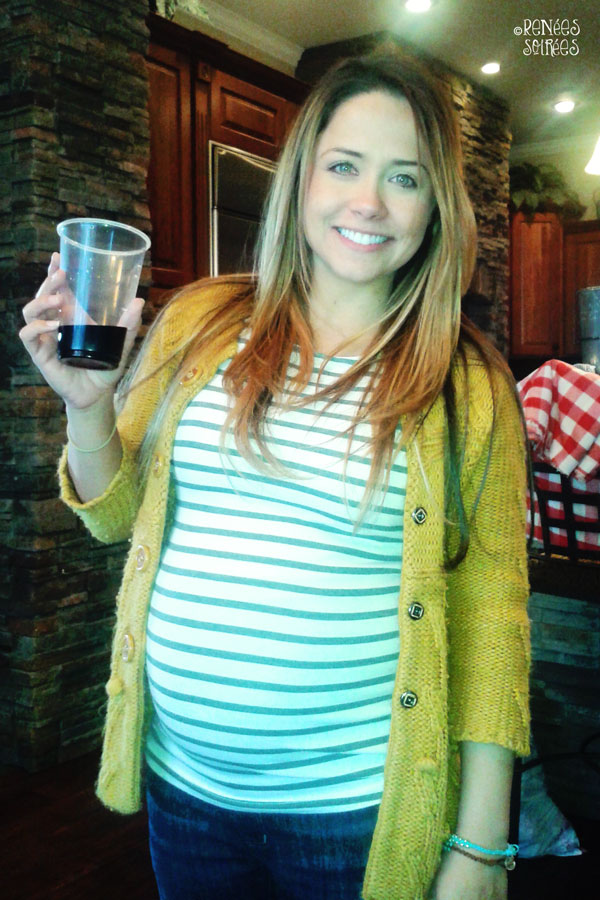 Ashley taught one of the crafts we did: making felt flower broaches. I got so irritated with the asymmetry of mine (the grey one below), that my table started calling me the ‘anal-retentive crafter’. 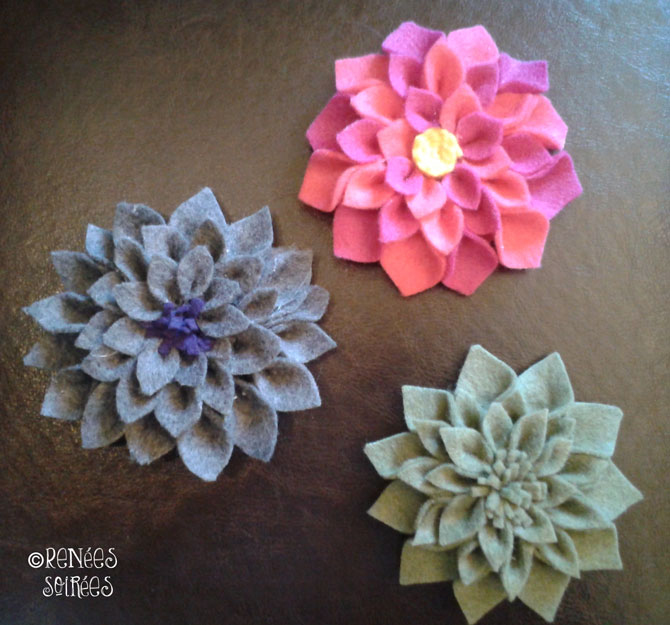 So when someone pulled out a Cricut & we were each asked to make a square for a traveling quilt, this is what was made for me while I wasn’t looking! 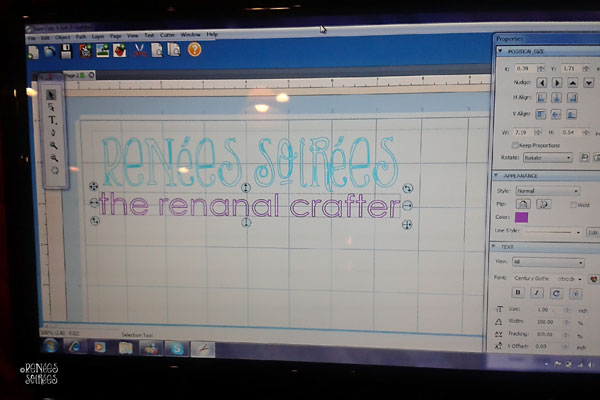 I thought it was the funniest thing ever!
The OTHER funniest thing ever was this quilt square, which was based on a funny story that happened to a car full of gals who went to the Grand Canyon. Someone saw an animal and asked what it was. Another passenger, seeing the animal facing the other direction and in the rear-view mirror, said, “I think it was a horse.” Turned out it was an elk, which elicited much laughter about whether or not said passenger (who ironically is from farm country – Nebraska) could properly identify a HORSE.  I love the way they c0mmemorated it on the quilt square (and yes I know the drawing is actually a moose… it only adds to the giggle factor)! 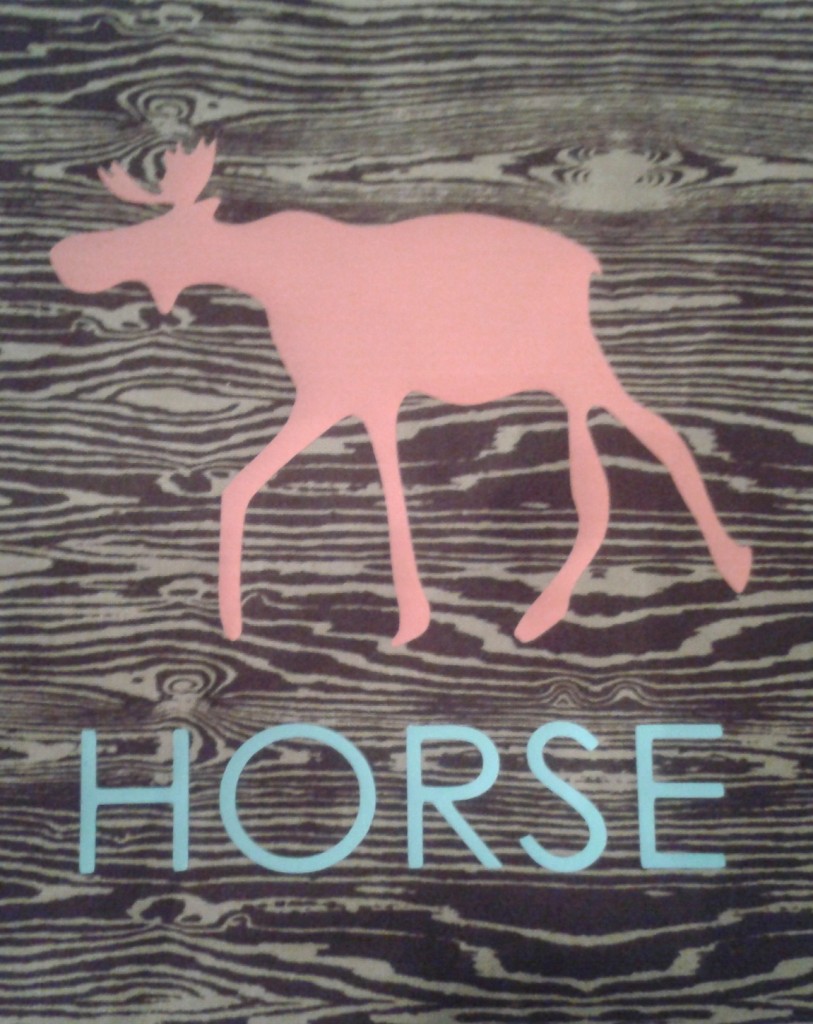 Our closing event was a Rock Star Party. It was open to interpretation, so some wore tattoo-print stockings, some spiked or teased their hair… but everyone perfected their pouty face. 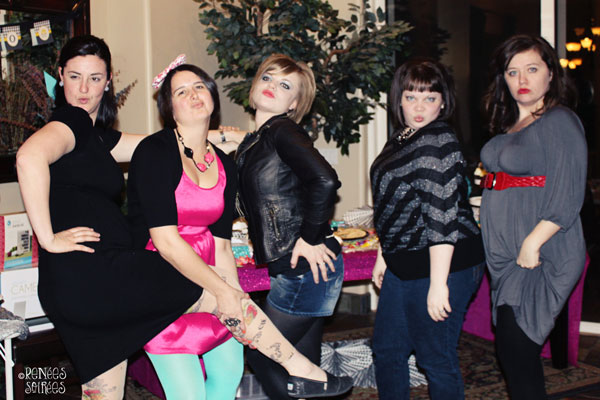 Above are: Nicki of The Hanger House, Heather of Kustom Kissers, Andrea of Bubble Wrapp’d, Tricia of Mama Marchand, and Jules of Inspired Jules. 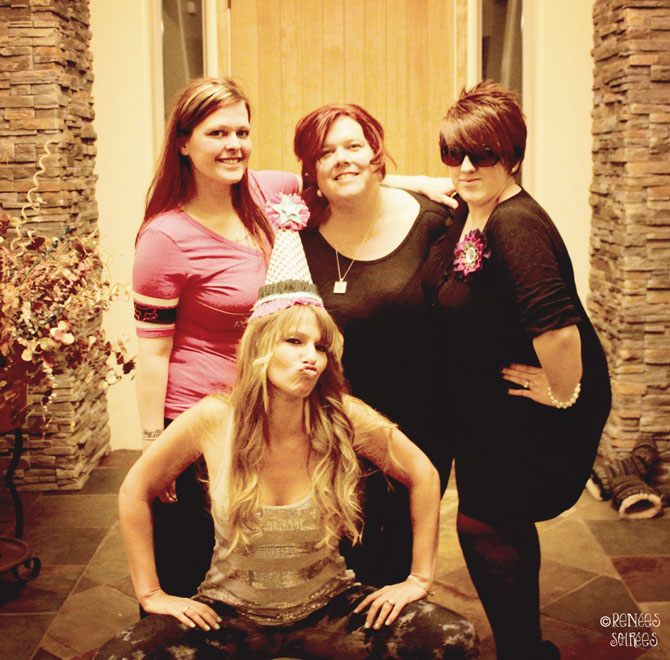 Stephanie from Sand And Starfish was fully embracing the Rock Star theme!

When you have a room full of bloggers, you can count on a ton of Mamarazzi!
This is Steph again, and Kashoan (of Krafty Kash) snapping some of the thousands of photos that were taken over the 3 days.
Kashoan came to Arizona from Nebraska. She was my roomie and ended up being one of the most entertaining people I’ve ever met! 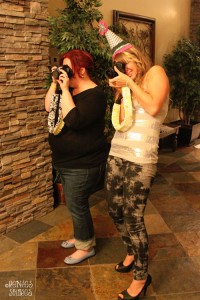 And a group shot during our party: 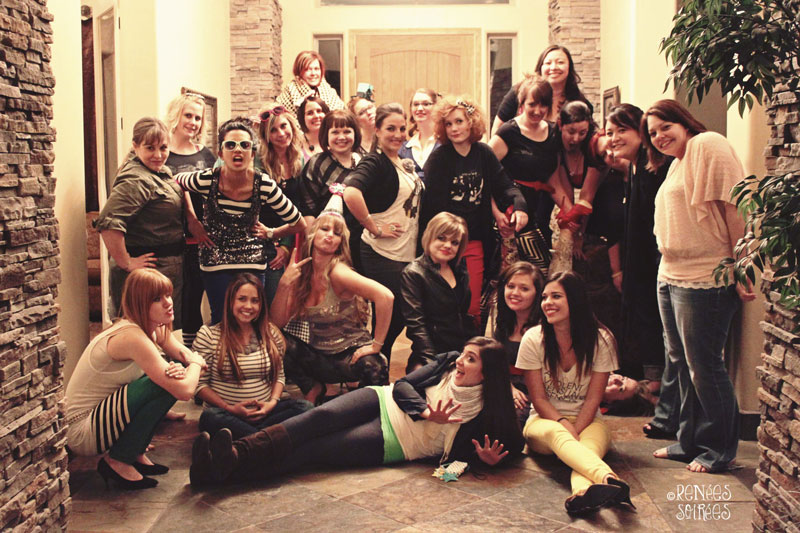 Here’s a Where’s Waldo-type question for you… did you notice the red shoes in the air (on the right)?  Those shoes, and the expressions of shock over the upside-down crafter, are the funniest part of this shot to me.  🙂

I met some amazing women at the retreat, and I hope to keep in touch with them for many years! And that’s what I choose to take away from my weekend in Flagstaff.

More on the swag bag loot soon… still catching up on lost sleep from the retreat! 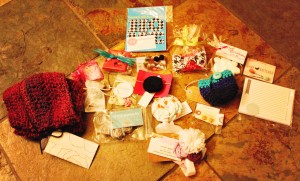 As a final note, I wanted to quickly address the infighting that has gone on about the Creative Estates event.

I attended a women’s conference years ago, early in my corporate career. The keynote speaker was Elizabeth Dole, and some of the things she said really hit home. She asked the crowd, “Would you rather work for a man or a woman?” She cited some study that said most women employees would rather NOT work for a female. “Why?” she asked. Why would we fail to support someone who was fighting the same fight we were (climbing the corporate ladder, breaking glass ceilings, etc)? Shouldn’t we be on the same team? “We women are OUR OWN WORST ENEMY!” said Dole. I have never forgotten her words, especially after she told the following story (she told it much more eloquently than I will, but here goes): 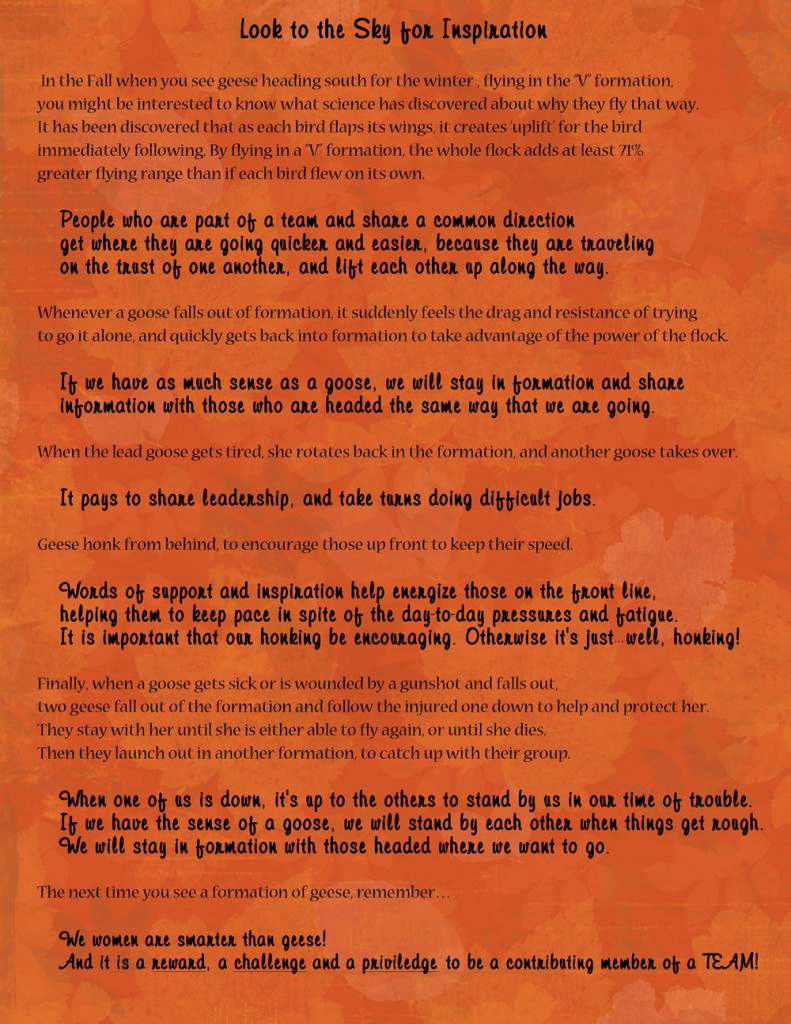 One thought on “Creative Estates retreat”