NEW to the shop! This Polar Party theme can be used for winter birthdays, ice skating parties, snow play days, ice hockey parties, or like I did… for a hot summer birthday, celebrated at an ice-themed play place!

My son has an August birthday, and here in Arizona, we are absoultely *sick* of the heat by then! So I thought it might be fun to go to a new Polar Play place, that acts as an ice bar for adults at night, and a chilly kid play zone during the day. The kids played frozen Tic-Tac-Toe, threw fake snowballs, and felt the frozen ice sculptures.

Here is my son and his friend Keenan, posing with some penguin ice sculptures. Can you see them? (The ice sculptures, not the kids, silly)! 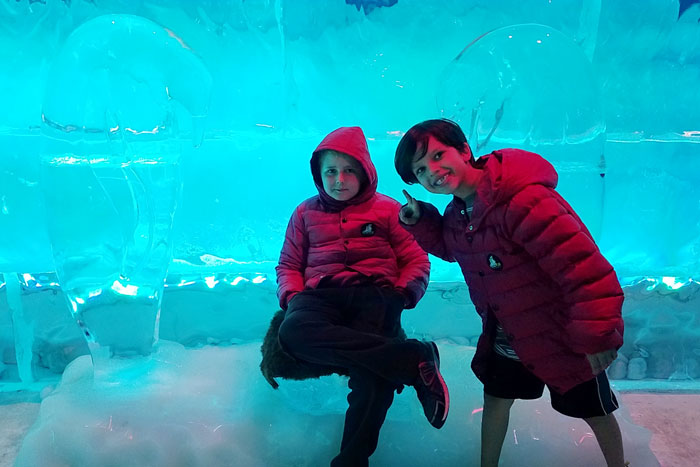 The facility loans all guests parkas and mittens, which is good because that is the kind of thing that we wouldn’t have readily available at home. At least not in August!

Here is the invitation, which is available in my shop here: 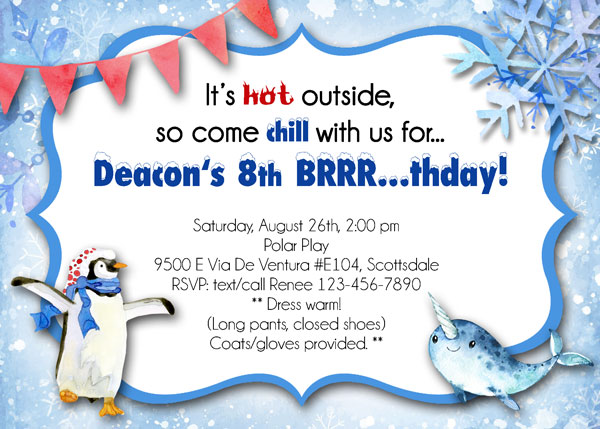 There are many other versions available, depending on the type of party you are having: 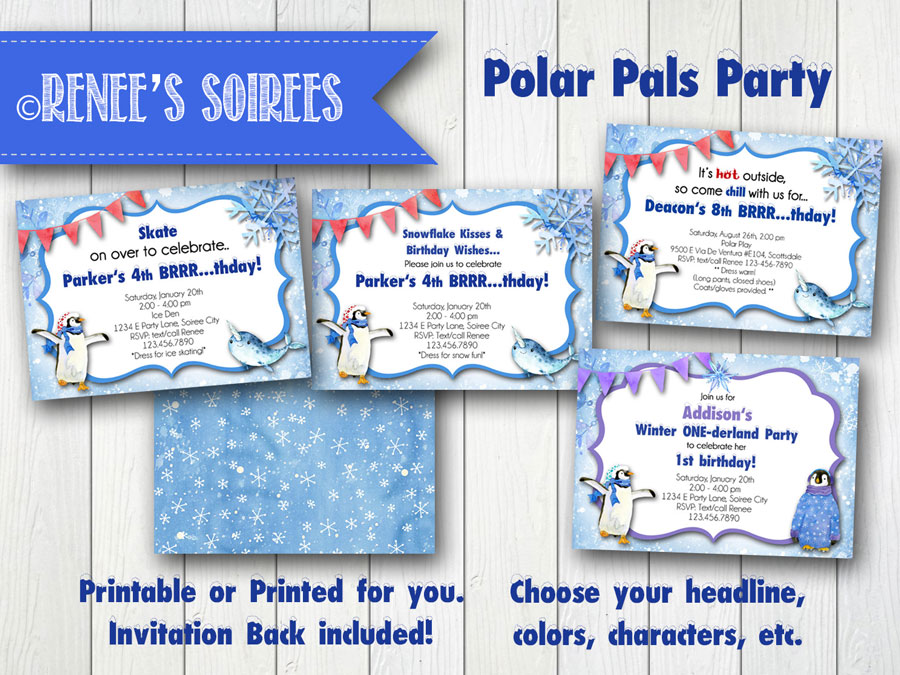 I chose a watercolor look for this collection. The addition of the wolf was my son’s request. He wanted either a husky or wolf in this year’s theme. I included the narwhal because
a) Narwhals are awesome, and
b) Kids love this super annoying Narwhal song.

The 11-piece Polar collection can be found in my shop here. 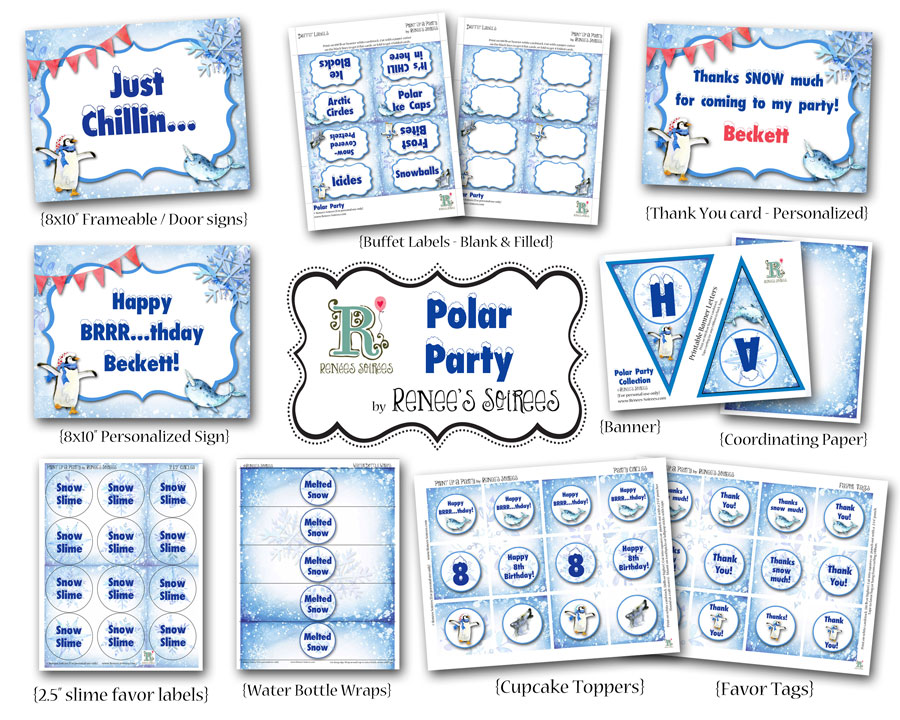 And here is the collection in action, on the party table: 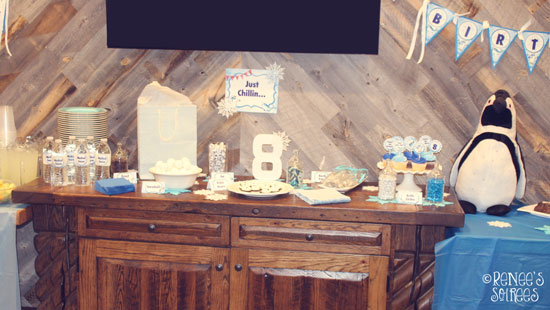 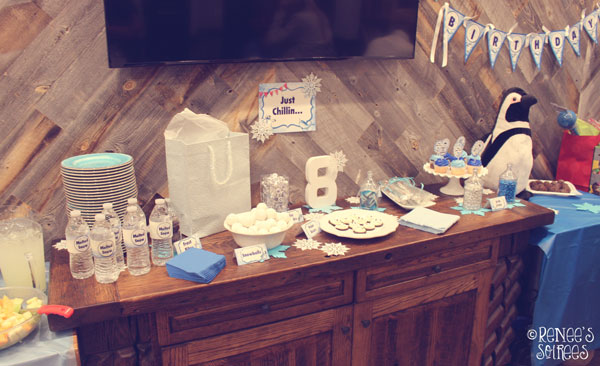 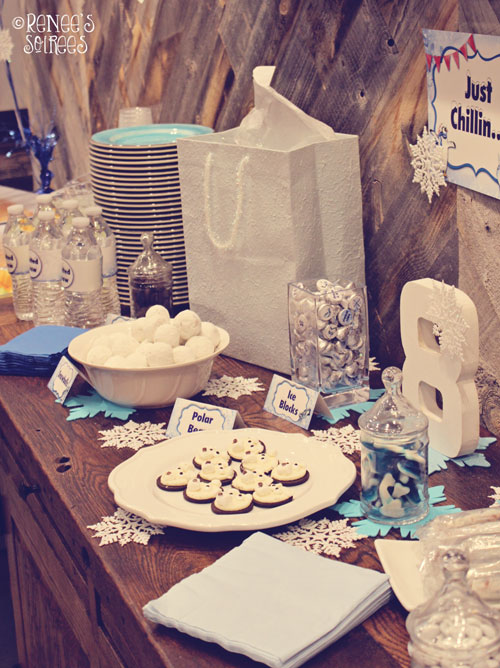 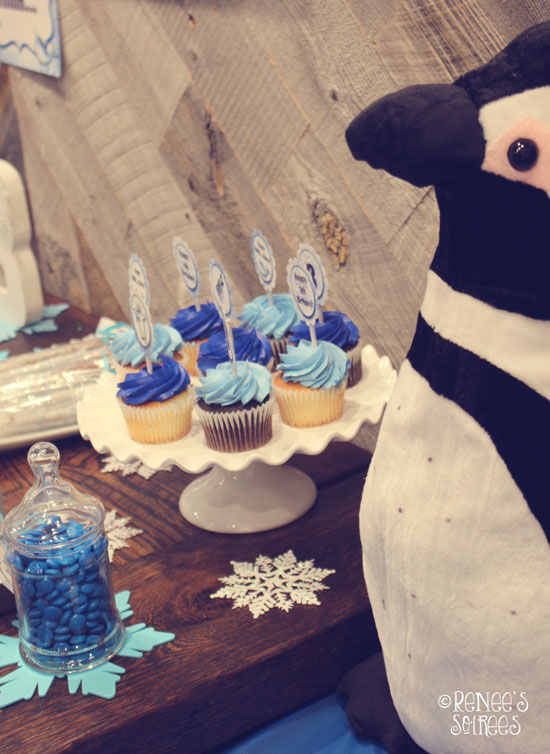 These Hershey’s Kiss stickers are available here (select POLAR PARTY from the drop-down menu). They are great on the party table, and in favor bags: 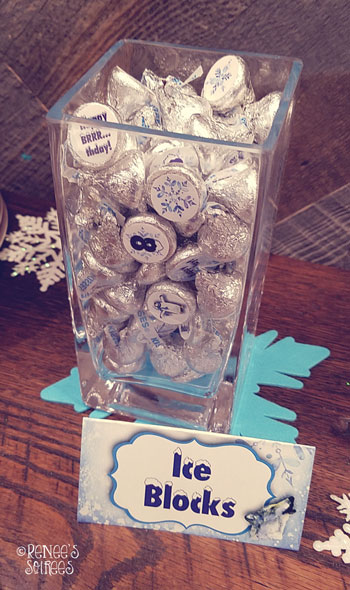 I had the birthday boy and his six-year-old friend apply the stickers. Of course I had to sacrifice a significant number of kisses for that endeavor (it went more like this: one for me, one for the bowl, one for me… LOL). But it was worth it to make them feel involved. 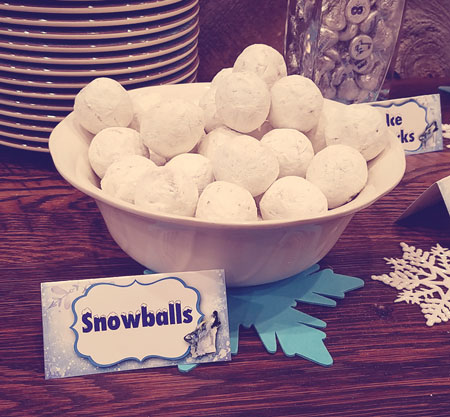 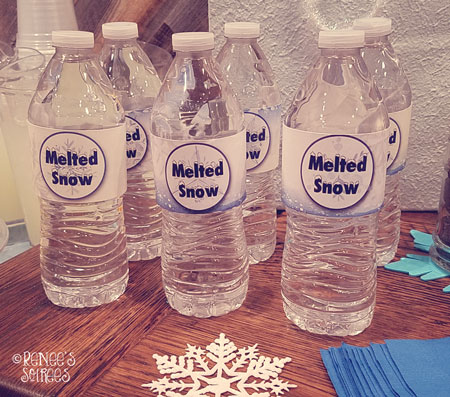 The cupcake toppers are part of the Polar collection as well: 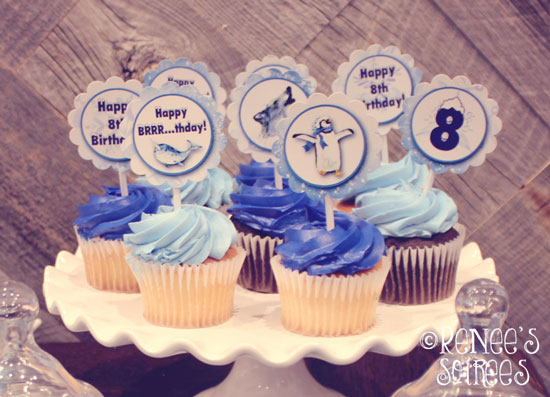 I made dipped pretzel rods as favors. I dipped them in white Candy Melts chocolate, and sprinkled blue sugar on them while they were still wet. Then I sprayed them with an edible pearl spray (that part wasn’t essential, I just wanted to try it. And it looked pretty).  I put them into cellophane treat bags and tied them with blue raffia. You can get all of these ingredients at craft stores, cake shops, Walmart, or online. 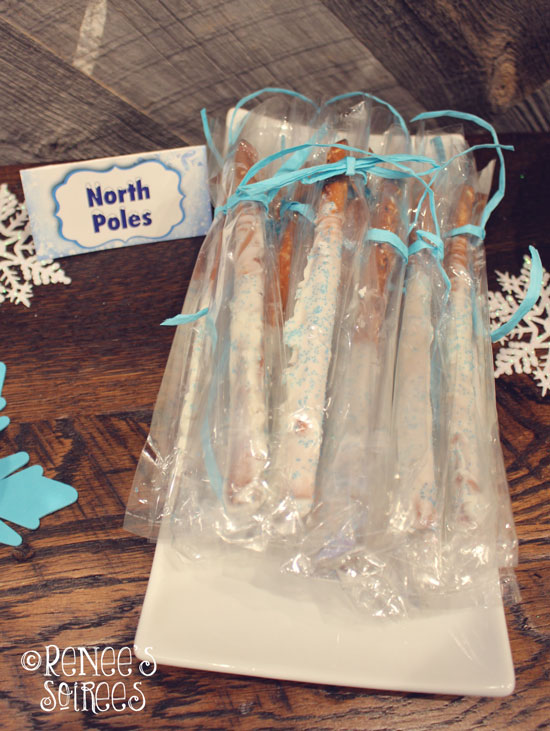 My eight-year-old suggested calling them “North Poles” and I thought that was hilarious! I love it when the kids chime in with something fun and creative like that. 🙂

Here are the pretzel sticks, drying on a baking rack the day before: 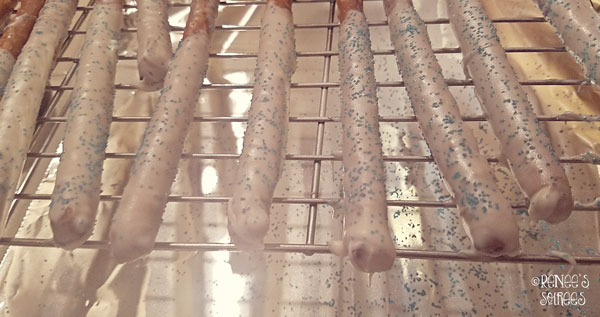 I made these polar bear cookies using an idea I found on trusty old Pinterest. We made a lot more than this, but the box got turned over en route, and the toppings fell off. D’oh! By the way, I would say that this craft was not as kid-friendly as I had hoped. Placing the eyes and noses was really tricky! The only thing the kids ended up helping with was eating the creme-free Oreo pieces. LOL 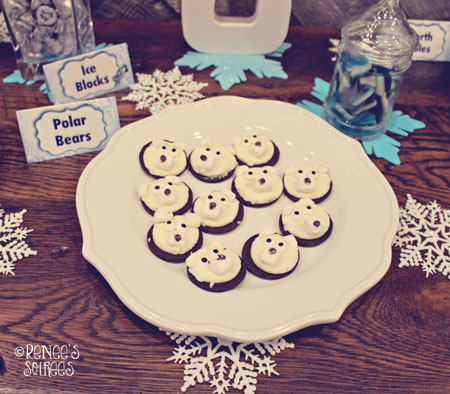 I got this white “8” at Hobby Lobby, and I bought some snowflake decor while I was there, because even in August they have Christmas items out. Yay!

I decided to give out slime as a party favor. Keepin it real here… I have never made it before, so I collected recipes from my slime-making friends, researched my options, bought all the ingredients, and made a test batch. It didn’t come out at all! So I hired a local tween named Jensen who makes and sells slime, and she came through for me on short notice! I put the slime into small mason jars. I included the labels I created for the slime in the polar collection, in case you want to do the same. 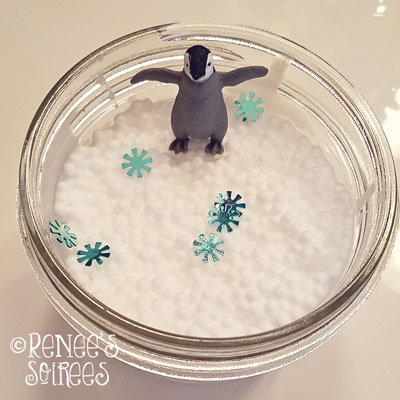 I was expecting a few younger kids at the party, and I didn’t want them to have a breakable jar, so I put theirs into plastic containers: 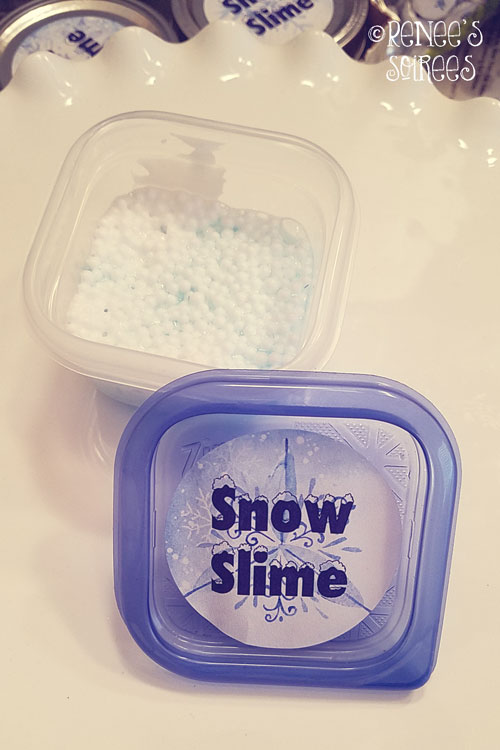 I picked up some small arctic animal figures at a local craft store, and included them in the slime. They sank into the slime, and made for a fun surprise for the kids. (And yes I know there aren’t any penguins in the arctic. But I didn’t name the toys. LOL) 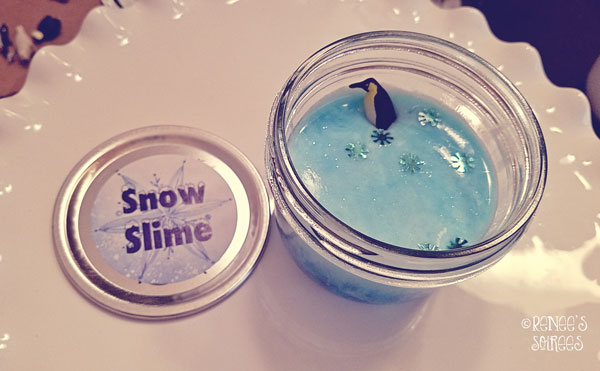 Birthday boy in the party room: 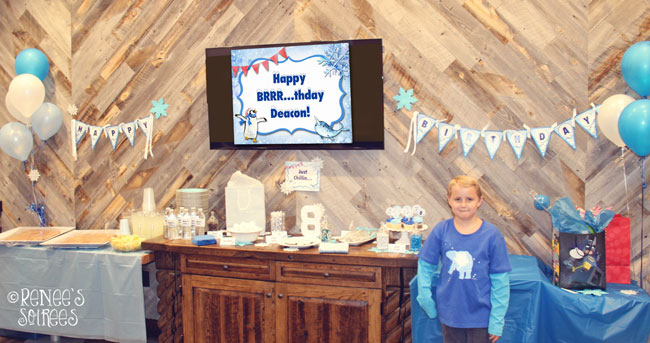 Here are some snowflakes that you can use as decor, OR for several of the following games: 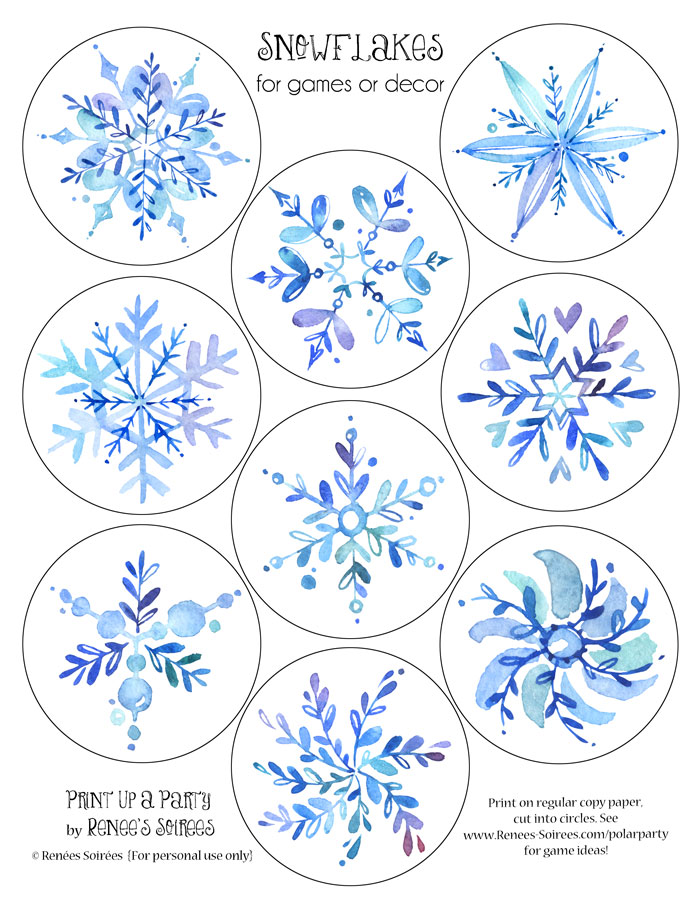 Print and cut out the snowflakes above.
Mark 2 lines in the room with painter’s tape, about 6 feet (2m) apart. (You can make the lines farther apart if the kids are older or need more of a challenge.)
Give each child a snowflake and a straw.
The goal is to blow their snowflake with the straw, from the starting line, across the finish line, without touching the snowflake.

Collect two or more bowls (depending on how large the crowd is).
Print enough snowflakes above so that each child has 6 or more snowflakes. Have each child stand in front of a bowl and drop their snowflakes one at a time. The winner is the one who lands the most snowflakes into their bowl.

(This works best on a rug or on carpet). Use large cardboard boxes or flat pieces of cardboard. Divide the children into teams of 3 or more. One team member sits in the box (or on the piece of cardboard). The other team members push them across a line on the other side of the room and back to the starting line.  Then the second team member gets into the sled, and repeat. Keep playing until one team has pushed all their teammates across the room and back.

Tear off a piece of wax paper, and let 2 or more kids race across a room and back with the wax paper under their shoes. Remind them to keep their feet somewhat close together, so they don’t end up slipping and doing the splits!

And finally, this is me at the party with the birthday boy, as he makes a wish. Soooo many great memories were made on this day! I am so glad I put the effort in, because it wasn’t that difficult to pull together, and the kids who were there mention it every time I see them, so it seems that it was enjoyed by all. 🙂 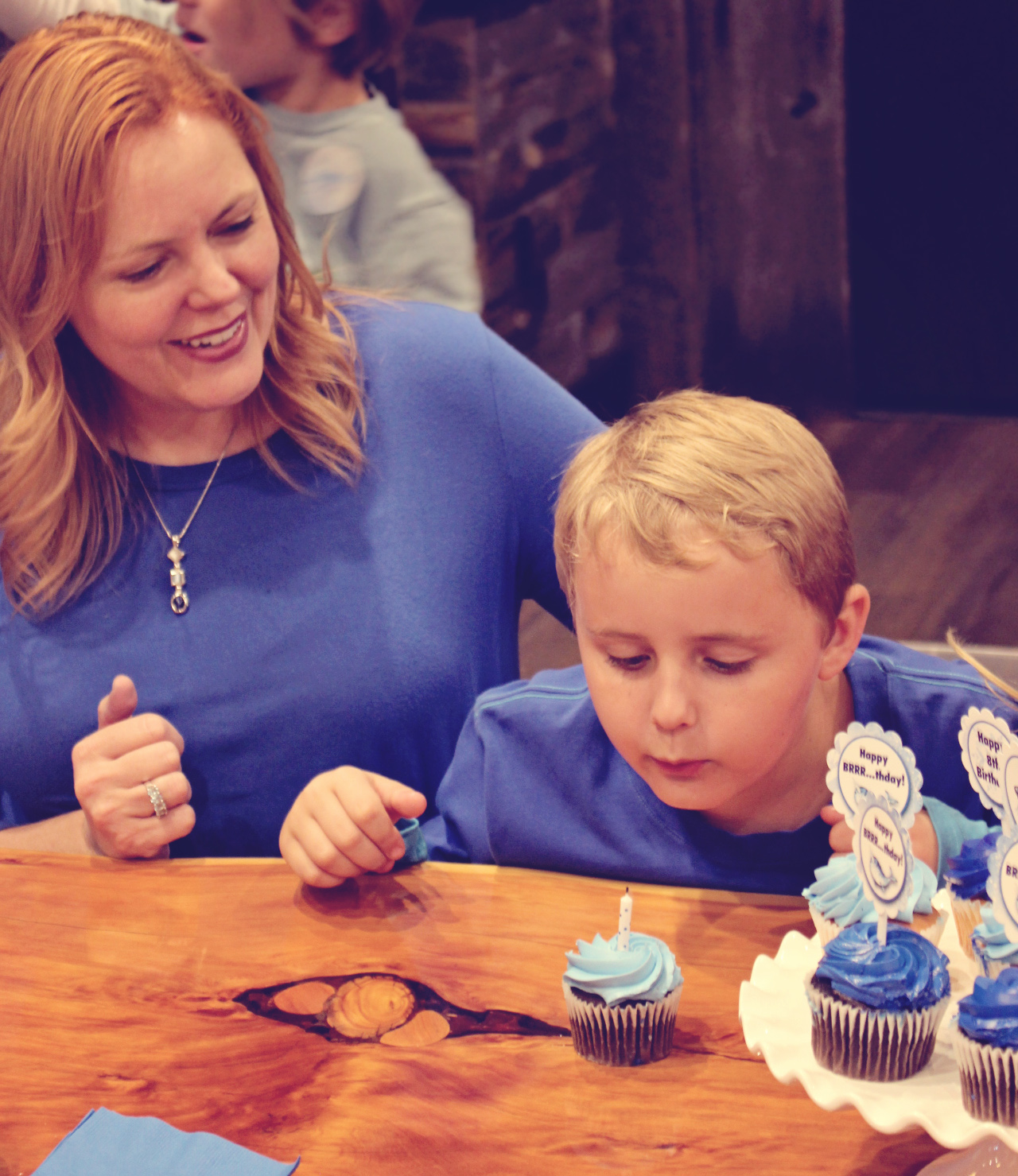 I hope you enjoyed this Polar Party as much as we did!

This party also appeared on Skip to My Lou.