Even though I design my own party printables, sometimes your child requests a certain theme, and when you research it, you realize that you could never improve upon a collection that already exists. And that’s how I found myself using this amazing Magic Collection. I hope you enjoy the photos as much as I enjoyed throwing this party…

Here is the dessert table:

And the amazing custom Magic Hat cake, complete with wand!

I made some cake shooters, consisting of brownie bites and red frosting. Kids especially go mental for push pop anything!

These Top Hat Pops are my own creation, inspired by similar leprechan hats (with instructions here). They are made of jumbo marshmallows, Nilla Wafers, and dipped in dark chocolate candy melts (tinted even darker with a bit of black food coloring). I used a flat frosting tip and red frosting for the band.

I made the pretzel “magic wands” by dipping pretzels into white chocolate candy coating, and sprinkling red decorative sugar on them while they were still wet.

The cutlery holder is a re-purposed container with an opening for a photo in the front. I purchased it at Home Goods and used a favor tag instead. The glass container for the pretzels is also from Home Goods.

I filled apothcary jars with red and black candy (M&M’s, licorice, cherry sours, red gumballs, etc).
I made these tags myself, so don’t be cross with Amanda at Shindig if it isn’t included in her collection.  🙂

Because the party was near Easter, there were bunny items galore in the stores, but most of them were the wrong color scheme. But I couldn’t resist picking up these rabbit pops from Sam’s Club. The sign is a 4″ medallion taped to a chop stick (yep!) and the can is a formula can wrapped in scrapbook paper (no kidding)! See, you can make a party as elaborate or as inexpensive as you want!

Well I can’t feed the children JUST desserts, so I had another table with healthier options.

The food was fun, but the REAL highlight of the party was the magician. Christopher the Magician made the kids and the parents laugh, and after the show he gave them a magic lesson and a favor bag with magic supplies. I first met him when he performed for my son’s kindergarten class on a day that I happened to be volunteering. I think I laughed harder than the kids did, so I knew we had to have him!

Here is the birthday boy with his siblings. (He looks like he’s sulking, but I think it’s just the shadows.)
He is wearing a custom shirt that I bought on Etsy from a seller who no longer exists, but there are many other cute options, for instance these shirts with a magic hat and age number or initial.
I bought a magician costume for the birthday boy’s little brother (figured I could use it again at Halloween, right?!). 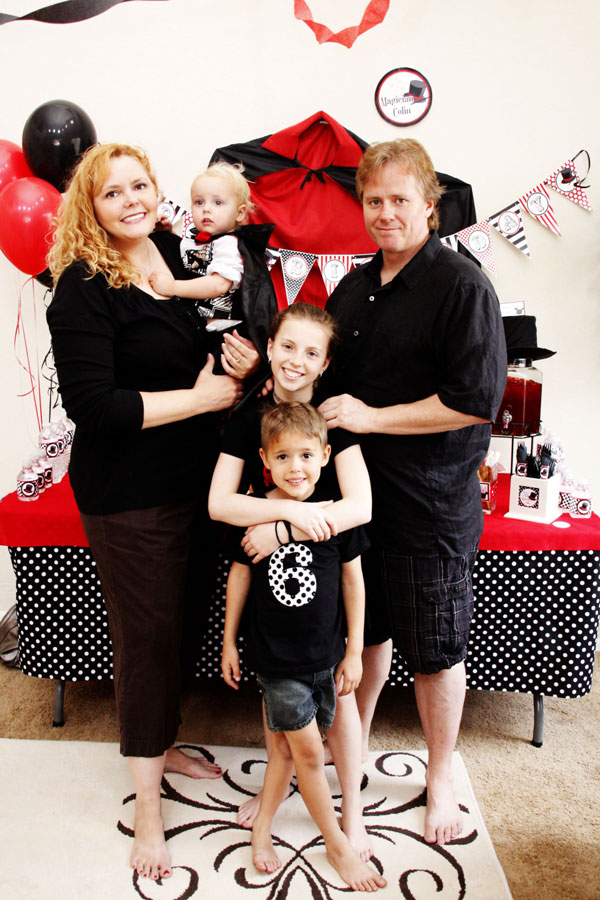 I hope you enjoyed this tour of Colin’s Magic Party!

All photos (except for the last one) by the amazing Amanda at Rule of Faith Photography.
Magic Hat by the Cake Cafe in Ahwatukee, AZ.
Magician party printables by Shindig Parties To Go